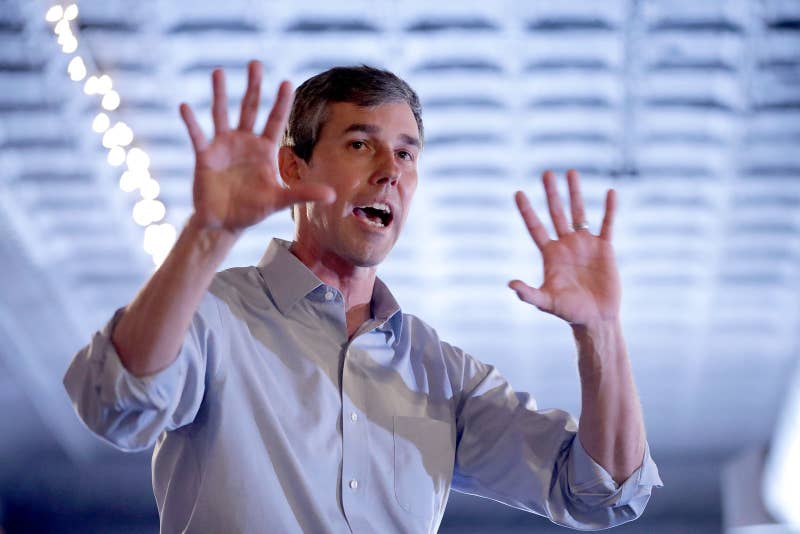 An unexpected sentence: Beto O'Rourke, the newest Democrat in the 2020 presidential race, was once part of the hacker collective "Cult of the Dead Cow."

A more expected sentence: We have quickly come to the political era where our politicians have written some pretty weird or embarrassing or actually kind of insightful stuff online when they were teens.

O'Rourke, who is currently campaigning in Iowa, talked to Reuters recently about his involvement in the collective (which is relatively famous in the tech/hacker community) after a reporter there discovered he was once a member.

“There’s just this profound value in being able to be apart from the system and look at it critically and have fun while you’re doing it,” O’Rourke told Reuters. “I think of the Cult of the Dead Cow as a great example of that.”

As one aspect of his engagement with the group close to 30 years ago, O'Rourke wrote a whole lot of content (known as t-files) under the pseudonym "Psychedelic Warlord," Reuters reported. The writings there — which range from interviews to short stories to poems — might be familiar to you if you were once a teen or preteen with a LiveJournal, Xanga, or a WordPress blog. Much of the writing reads like an inside joke, some of it reads like a young person just trying to experiment a little with what he can do with language.

Reuters postulates that some of the writings here might be problematic for O'Rourke in his presidential campaign. If that proves true, several generations of political hopefuls are pretty screwed.

We're entering the period where millennials are running for president. O'Rourke, squarely a Gen X guy, is just giving us an early taste of the kind of public maturation process we're all going to be subjected to for basically every presidential candidate from now on until the internet melts down or someone finally figures out how to delete awkward pictures your college roommate tagged you in on a public Facebook. O'Rourke may be one of the first to have his youthful online weirdness opened up for the world, but he's just at the start of a wave. Unless you want a presidential candidate who never spent much time online as a kid, expect to have a presidential candidate with a colorful and public online history.

A spokesperson for O'Rourke's presidential campaign did not immediately respond to a request to confirm that all Cult of the Dead Cow writings from Psychedelic Warlord were in fact written by the candidate. But Reuters reported that the t-files under the pseudonym were from O'Rourke, and in at least one instance, Psychedelic Warlord refers to himself as "Robert," O'Rourke's given name.

Here's just a little bit of what is still online from Psychedelic Warlord.

I thirst for you,

Good fortune for those that do.

Love me, breathe my feet,

The Cow has risen.

Some of the archived writings from Psychedelic Warlord lean toward the personal, which you'd expect for someone who has kept a reasonably active Medium account over the last few months.

In 1990's "My Day With the Dentist," Psychedelic Warlord goes to the dentist (O'Rourke apparently has a thing for public dentistry). A relatable snippet:

By now I'm drooling all over the place, because their godamn saliva-sucker-upper isn't working too well; and I can't feel the right side of my face at all.

Of course, I can't talk because the right side of my face is silly putty and he now has about thirty tools in my mouth. So, of course, he begins to ask me some more questions.

ULTRA TRENDIES know nothing about the alternative scene they profess to care about so much. One can often hear them state something along the lines of, "Yeah, I went drinking with Minor Threat last night. Their lead singer has the COOLEST mohawk." [...]

Here's where Reuters suggests O'Rourke may run into some trouble. In 1988's "Visions From the Last Crusade," Psychedelic Warlord has a bit of fiction about murder. An amateur analysis here suggests this is not fiction that is praising murder so much as a fictional criticism of a culture Psychedelic Warlord was not super fond of (see diaries above). A one-line example: "The more people I killed, the longer my dreams were."

In 1987's "A Feature on MONEY — Today's Monster," Psychedelic Warlord imagines a world without money. From the start of the piece:

Money has been a part of your life since the day you were born. It has been in everyone's life for thousands of years. In fact, you have to go back to the ancient Chinese and Greeks to find the origins of money. Since it has been a part of your life for so long, you probably never thought about life with out it. Well, here's your chance. Think, a free society with no high, middle, or low classification of it's people. Think, no more money related murders, suicides, divorces, or theft. Think, no more families living below a set poverty line or children starving to death because of a lack of money. You're probably telling yourself, "sure, this sounds great, but how would we ever accomplish this?" Well, in this short file, I will explain for you the virtues of a money-less society and the paths we must take to reach them.

Warlord acknowledges that such a society would necessitate a serious reworking of the government, and doubts "the masses would support such a radical move at this time." But this is *extremely* the type of radical idea a teenager who is just getting into politics could think through. And it is legitimately interesting to see someone work through some radical ideas, no matter how far that person may come to feel from those ideas later in life. "Remember," Psychedelic Warlord writes, "we are the next generation, and will soon rule the world."