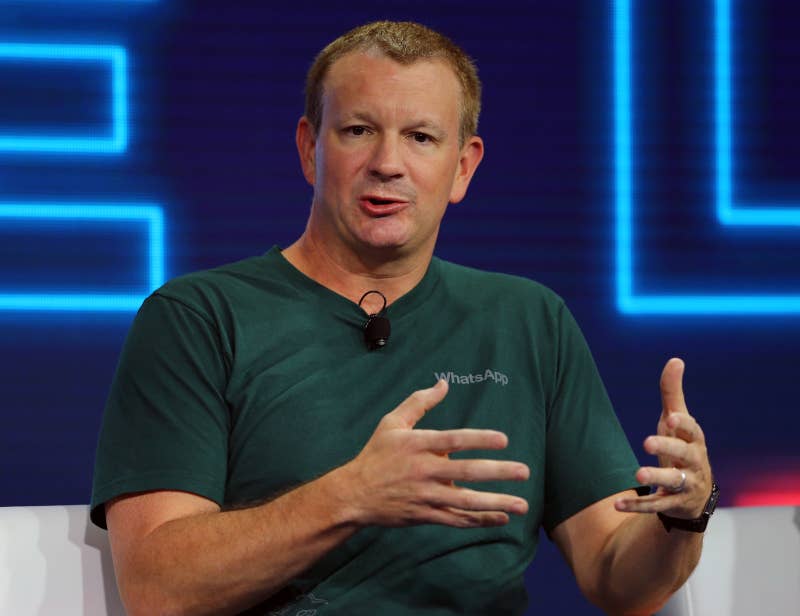 WhatsApp cofounder Brian Acton defended his decision to sell his company to Facebook for $19 billion and encouraged students to delete their accounts from the social network in a rare public appearance at Stanford University on Wednesday.

As one of the guest speakers for Computer Science 181, an undergraduate class focused on technology companies' social impact and ethical responsibilities, Acton, a 47-year-old Stanford alum, explained the principles behind founding WhatsApp and his fateful decision to sell it to Facebook in 2014. In doing so, he also criticized the profit models driving today’s tech behemoths, including Facebook and Google, as well as the Silicon Valley ecosystem in which entrepreneurs are pressured to chase venture capital and large exits to satisfy employees and shareholders.

“You go back to this Silicon Valley culture and people say, ‘Well, could you have not sold?’ and the answer is no,” he said, referring to his decision to make the “rational choice” to take “a boatload of money."

Despite selling WhatsApp in a deal that made him a billionaire several times over, Acton’s negative feelings about Facebook are no secret. He departed in November 2017 after more than three years at the company following tensions surrounding the introduction of ads onto the messaging platform, something he and fellow cofounder Jan Koum vehemently opposed. (Koum announced he was leaving Facebook last April, amid reports he disagreed with the company’s plans for monetizing WhatsApp and its approach to user data and privacy.)

It is time. #deletefacebook

15.9K people are talking about this

Wednesday’s appearance, in which he shared the stage with Ellora Israni, a former Facebook software engineer and cofounder of women’s diversity in tech initiative She++, was only the second time Acton has spoken publicly about the deterioration of his relationship with the social network and its CEO Mark Zuckerberg. “I sold my users’ privacy to a larger benefit,” Acton told Forbes in September, detailing the conflicts that eventually led to his departure. In the piece, Acton described how Facebook had set goals for WhatsApp to hit a revenue run rate of $10 billion within five years of monetizing by pushing ads and offering businesses ways to directly communicate with users.

While Acton didn’t discuss the specifics behind Zuckerberg’s push to monetize WhatsApp during his talk at Stanford, he spoke critically of business models that incentivize companies to prioritize profits over people’s privacy.

In selling to Facebook, Acton said that he had a certain naivete at the time, idealistically thinking that he and Koum could keep doing things their way by introducing a way to diversify revenue. He said he pushed for a service model, possibly by charging WhatsApp users a small fee to use the app, as the company did in its early days, to counter Facebook’s traditional revenue driver: advertisements. Instead of sucking up user data to help advertisers target ads, Acton and Koum hoped a service model could align their interests with the users’ need for privacy and security.

“WhatsApp’s business model was: We’ll give you service for a year for a dollar,” he said. “It was not extraordinarily money-making, and if you have a billion users … you’re going to have $1 billion in revenue per year. That’s not what Google and Facebook want. They want multibillions of dollars.”

A WhatsApp spokesperson declined to comment on Acton's statements and instead pointed BuzzFeed News to a blog post from the company when it did away with the $1 fee in 2016.

In explaining WhatsApp’s early decision-making, Acton said the company built the features that people wanted, including end-to-end encryption, which multiple users requested before the company eventually instituted it across the platform. He also recalled his early model for WhatsApp was Craigslist, a company with a small number of employees that provided a public service and built a successful business without raising venture capital.

Ultimately, WhatsApp diverged from that ideal and raised $60 million from Sequoia Capital before selling to Facebook. That change in ownership took away Acton and Koum’s decision-making power, with Koum joining the Facebook board. That left WhatsApp beholden to shareholders and Zuckerberg, who still maintains voting control over the tech giant.

“Accountability to shareholders absolutely drives the decision-making and skews it,” he said. “At Facebook, they spent an inordinate amount of time figuring out how they can get into China.”

Last week, BuzzFeed News reported that Facebook would no longer pursue a plan to push its social network into China, following the publication of a long note from Zuckerberg in which he emphasized a privacy-first vision for the company’s various messaging applications. Acton applauded Facebook’s decision to not place servers in China, and referenced how other businesses make Faustian bargains to operate in the country. Apple, for example, a company he considers to have a strong track record with user privacy, has servers in China in order to sell its devices to the some 1.4 billion people in the country.

“I think that a lot of these corporate decisions are made arbitrarily and capriciously,” Acton said.

He decided to leave Facebook because of the arbitrary decisions from Zuckerberg and company’s chief operating officer Sheryl Sandberg. While Acton noted that Facebook left WhatsApp alone for its first three years, his last months at the company was marked by the exertion of more influence. The WhatsApp cofounder called Facebook “a bit of a monoculture,” where he was the outlier. “I’d be the one guy in the room and ask, ‘Why do we want to do this?’ and I would be looked at like I was crazy.”

Still, he doesn’t envy Zuckerberg, calling the Facebook CEO’s position in policing people’s behavior on the social network a losing battle. WhatsApp, with its end-to-end encryption, made it impossible for anyone to monitor what its users were saying, freeing Acton and Koum of responsibility for what happens on the platform. “There is more value to protect the innocents of the world than the criminals,” Acton explained, referring to users in oppressive countries that rely on the encryption for safety.

While that utilitarian calculation downplays the negative consequences of an unmoderated platform, including the facilitation of the spread of disinformation and the incitement of violence, Acton has held fast to the idea of not interfering. “I think it’s impossible,” he said when asked about moderating content. “To be brutally honest, the curated networks — the open networks — struggle to decide what’s hate speech and what’s not hate speech. ... Apple struggles to decide what’s a good app and what’s a bad app. Google struggles with what’s a good website and what’s a bad website. These companies are not equipped to make these decisions.”

“And we give them the power,” he continued. “That’s the bad part. We buy their products. We sign up for these websites. Delete Facebook, right?”